Hydraulic Oil Types and Properties – Everything You Need To Know 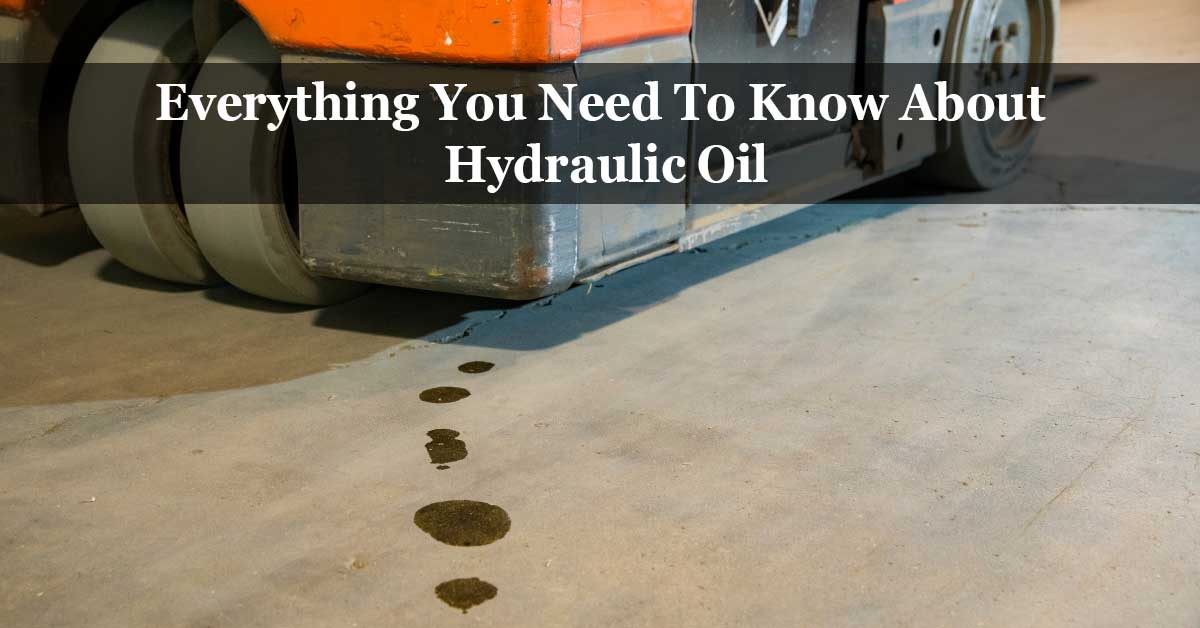 Hydraulic oil (hydraulic fluid) is a synthetic or mineral fluid used to transfer power in hydraulic equipment and machinery. The hydraulic fluid conveys energy in the form of flowrate and pressure.

Although all liquids would qualify to convey energy in hydraulic systems, the liquid requires certain physical and chemical characteristics to qualify as hydraulic oil. Certain fluids cannot be used in hydraulic systems due to their physical and chemical characteristics, such as water or vegetable oil. Water freezes, do not lubricate and becomes oxidized when in contact with air, while vegetable oil decomposes and rapidly becomes oxidized in the presence of heat and air.

Most doped hydraulic oils’ characteristics dwindle rapidly with ageing and overheating; therefore, doped oils are not common and used only for special purposes.

The risks of gumming are increased by long rest periods of the equipment and the presence of impurities in the fluid. Gumming is characterized by the formation of a micrometric sludge. This sludge sometimes hardens into a very hard varnish, and a press may be required to remove the components.

Seizing occurs in moving parts and is caused by the presence of metal contaminants in the oil.

Erosion is due to the very high speed of the fluid. This progressive and irreversible phenomenon is aggravated by oil contamination.

Obstruction concerns the parts with small orifices. These are easily obstructed by particles in suspension in the fluid.

Oil filtering, whether it is performed within the system during operation or filling, is the only efficient remedy against contamination.

Draining is the operation consisting of replacing all the fluid in the hydraulic system. It is performed when pollutants’ concentration becomes too high or when the oil characteristics are much also downgraded.

Draining is usually a systematic maintenance operation performed at regular intervals. Its periodicity is specific to each type of machine. On average, draining is due every 500, 1,000 or 2,000 hours.

Hydraulic fluid quality becomes downgraded with use, and the occurrence of pollutants in the system is inevitable. Therefore, it is necessary to drain the system at time intervals, which depend on the system requirements in terms of oil quality.

Flushing is carried out with the oil used for filling and consists of operating the entire system for a certain period.

Density is the ratio between the mass of a volume of oil and that of the same volume of water at 4°C.

Usually, the density of oil is given at 15°C. The density of an oil increases with its wear means with the use and ageing process.

The viscosity is the property of fluids by virtue of which they offer a resistance to flow in a tube at a given temperature; it is measured in degrees Engler according to the SAE standard. Viscosity characterizes the ability of the oil to flow more or less easily. The higher the viscosity, the more difficult it is for the fluid to flow at a temperature and pressure.

If viscosity is high:

If viscosity is too low:

When measuring viscosity, we distinguish:

For industrial use, knowing the kinematic viscosity is usually enough. It is measured with a Viscometer; Viscometer is a funnel with a calibrated outlet port for measuring a fluid’s viscosity.

The latter can be measured with a viscometer and according to three methods.

The viscosity index characterizes the viscosity of the oil. It is designated by the acronym SAE followed by a number. In practice, this number is called grade (Example: SAE 10 – SAE 30 – SAE 90). The higher the grade, the more viscous the oil. This designation is arbitrary because certain factors disturb viscosity, in particular temperature.

The viscosity index (VI) is a coefficient that characterizes the change in the oil’s viscosity according to temperature. The higher the VI, the less the viscosity of oil varies with temperature; we then speak of multi-grade oil.

The indexing scale is determined as follows:

Modern hydraulic oils that have a VI superior to 100 are called VIE (Viscosity Index Extended) oils. An oil with a viscosity index that would not vary according to temperature is nowadays chemically unfeasible.

Lubricity is a liquid’s ability to resist being wiped or squeezed out from between the surfaces when spread out in an extremely thin layer. The hydraulic oil must ensure the lubrication of the system’s various components, whatever the working conditions. This lubrication ability is linked to the cohesive force between the molecules of oil so that a permanent film can be kept between the parts in motion.

Neutrality is the acidity of the oil. The oil must contain a percentage as low as possible of acid elements likely to attack the system’s components. The acid number or the neutralization value represents the number of milligrams of potash (base) necessary to neutralize one gram of oil’s acidity.

Chemical stability is the liquid’s ability to resist oxidation and deterioration for long periods.

The decomposition of the oil causes its alteration in color or odor, deposits on the components, and a lesser effect of the basic characteristics, leading to their cancellation.

The oils with high chemical characteristics are usually doped oils. However, as additives are very sensitive to special conditions of use, these oils are therefore relatively unstable. Consequently, it is formally not recommended to use special oil for any application different from what has been prescribed.

Desemulsification number is the ability of the oil to separate from the water it can contain. The presence of water is usually due to condensation in the reservoir, an air intake on a suction line, or a jet cleaning of the equipment.

The mixing oil/water generates an emulsion, which forms a whitish mud reacting to certain additives, which precipitate and accelerate the phenomenon, leading to the loss of all the qualities of the oil. In general, light oil emulsifies less than heavy oil.

The demulsification number indicates the time necessary for a certain amount of water emulsified with oil to separate from the water at a given temperature. The measurement methods can vary, but the process remains unchanged.

Any oil contains dissolved air (about 10% in volume), which is released during the phenomenon of cavitation. This air presence can also be due to air intakes on the system during suction or change of oil level in the reservoir.

The air bubbles mixed with the oil create a foam. The presence of air leads to the pump’s irregular functioning and the receivers and quick oxidation of the oil. The dopes (Chemical additives) reduce the formation of foam. But the classical solution to remove the foam and the air is to use a high capacity reservoir where the oil can stand.

The anticorrosive power is obtained by adding dopes because it is impossible to avoid the inlet of dampness in a hydraulic system. The oxidation is a frequent phenomenon on intermittent systems (stored vehicles).

For petroleum products submitted to cold, there is first a more or less quick increase in viscosity. Then, suppose the decrease in temperature is great enough. In that case, these products stop being real fluids and, as a result of their thickening, become close to the solid-state by being submitted to modifications resulting from various complex phenomena.

Pour point is the lowest temperature at which the oil still flows when it is cooled, not stirred, in standardized conditions. This characteristic is very important for systems designed to work at very low temperatures.

Cloud Point is the temperature at which a liquid starts solidifying or separating from the solution when the oil has cooled in standardized conditions.

Flashpoint is the temperature to which the oil must be heated, for it can give off vapors, which will ignite when a flame is applied.

The International Standards Organisation “ISO” Grade the hydraulic oil based on the viscosity using the symbol VG with a number; the higher the VG number, the more viscous the fluid is and vice versa.

Adding the AW symbol to the oil grade indicates that the oil is with anti-wear properties. The difference is that there are additives contained within the oil to reduce the corrosion and ensure no metal-to-metal contact between machinery components. Most of the additives used for this are zinc-based; zinc has anti-oxidative and anti-wear qualities, extending machinery life.

The Anti-wear hydraulic are used with gear, vane, radial, and axial piston pumps, which contain gears and bearings where mild anti-wear characteristics are required.